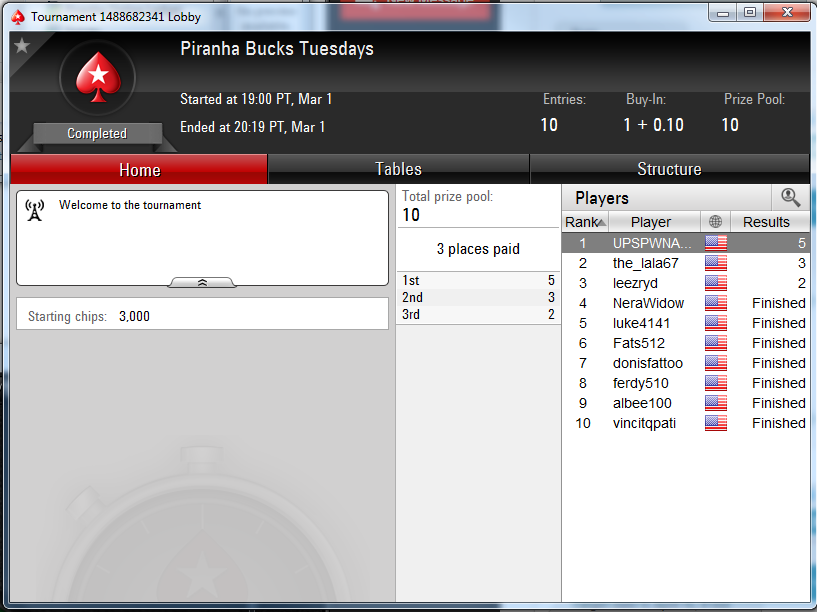 10 Players entered the arena in PB #24. First to go was Vinciqtpati after being crippled by UPSPWNAGE when his AA got out flopped by UPS KK pre. The very next hand Vinci draw did not hit vs UPS mid pair and Vinci was out in ugly fashion. This lead to our final table. Albee was out in 9th due to Donisfatto top pair holding vs Albee100 bluff with AJ high. It was the short stcks who kept doubling time and time again until finally Ferdy510 was Ko’d by LUke4141 in 8th.  In the biggest pot of the night UPS KO’d Donisfatto when Donisfatto called UPS shove with aq high on an 8282j board.  UPS showed 22 for quads and took it down.The legend Fats512 and Luke4141 were Ko’d next by Leezyrd and we were down to our money bubble. That burst quickly as Leezyrd had another KO when his aj held pre vs Nerawidow’s A6 and we were in the PB money. It was a flopped flushby UPS and a huge shove into it that sent Leezyrd home in 3rd for 20 PB’s.  IN the end the heads up match was short as UPS got it in with 2 overs a straight draw and an Ace high flush draw vs The_lala67’s 2 overs and a flush draw. The Ace on the turn sealed it and Lala earned 30 PB for a good game.  UPS with the win gave him 50 PB’s.  See ya all next week!