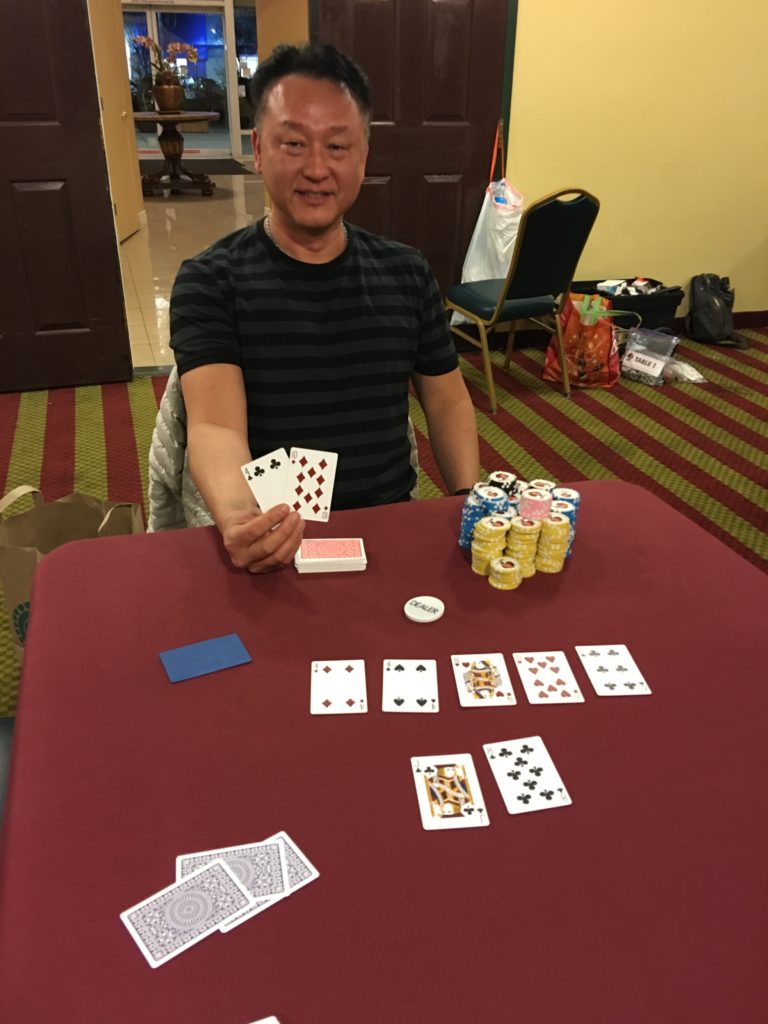 32 Players showed up for the first Piranha event of 2017.  The action was fast-paced and we reached the final table during the 300/600/75 level when Gerry Shebar shoved all in over Vlad Troyanker’s raise.  Vlad called and showed TT and Gerry showed QQ.  The flop brought Vlad a set and Gerry didn’t improve to finish tenth. Haisam started the final table as chip leader with Steve and Andy not far behind.  The rest of the table were bunched up with Spencer with just a few big blinds left.

The first big hand saw the chip leaders in a blind versus blind confrontation.  At 300/600/75 the action folded to Haisam who limped in.  Steve tapped the table and the players saw a flop of 8J4.  Both players checked to a turn 7.  Haisam check raised all in and Steve called.  Haisam turned over 84 for middle and bottom pair and Steve turned over J8 for top two.  Haisam needed a river 4 to win but instead saw Steve fill up with a river J.  Steve took a large chip lead with the $60K plus pot while Haisam fell back to the pack.

We saw our first bust out in the next level.  With blinds of 400/800/75 the action folded to Andy on the button who open for 2,200.  Eric called in the small blind.  The two saw a flop of 772.  The action checked through.  Eric check raised all in on a turn Q and Andy called.  Eric turned over KQ for top pair and Andy showed flopped trips with  J7.  The river blanked and Andy won a 30K pot and Eric was out in 9th.

Our next bust out also occurred in  the level.  Steve raised from the button  to 2400 and Jan shoved all in for 5625.  Rich called in the big blind and Steve also called.  Rich bet 5300 into a flop of 583 and Steve folded.  Jan turned over JJ but was dominated by Rich’s QQ.  Jan finished 8th  and in the unenviable position  of points bubbler.

Just a few hands into the next level of 500/1000/100 Ryan raised to 3000 and Vlad and Haisem called.  Ryan bet out into a flop of Q79 with one club.  Vlad folded and Haisem called.  The turn brought the 4 of clubs.  Ryan check raised all in and turned over QT of clubs and Haisem showed KQ.  Ryan missed his 12 outs on the river and finished 7th and earned 4 points.

A few hands later Andy opened 2500 and it folded to Vlad in the small blind who shoved in for 5700.  Andy called and turned over QQ and Vlad had KJ.  Vlad found some outs on a flop of J68 but a turn T and river 3 left him out in 6th and 7 points for his efforts.

Spencer, despite starting the final table with just a few big blinds, had found himself still alive and earning points.  Steve opened to 4400 at 500/1000/100.  Spencer moved all in from the small blind for 3300.  Andy called in the big blind.  Andy checked a flop of A94 and folded to Steve’s all in bet.  Steve turned over AQ and Spencer turned over T8, announcing “I’ve got outs”.  The turn brought a 6 to give him a gut shot and the river brought his needed 7 for the straight and a triple up.

Later in the level, Spencer again tripled his pleasure in an all in pot with KK against Andy and Rich.

With Andy winning two triple ups, Rich found himself the short stack.  Still at 500/1000/100 he shoved all in for 4300.  The action folded to Steve in the big blind.  Steve took a while but did the math and called the remaining 3300 and turned over 27 and Rich turned over AK.  Rich hit his top pair but had to fold Steve’s flush draw on the flop but held up for a double up.

The next hand Haisam raised to 3500 from the button as the blind went up to 600/1200/200.  Steve folded and Rich again moved all in.  Haisam took some time but eventually called and turned over A7.  Rich again had AK and held up for another double up.

There were no bust out in the 800/1600/200 level until the final hand of the level but the tournament was settled during the level.  Andy had become the big stack and began to assert his dominance over the rest of the table.  He raised more than half the hands in the level and won nearly all of them without showdown.  In the final hand of the level, Haisam shoved his final 9400 and Andy called in the big blind.  Haisam turned over K9 and Andy had A8.  Andy flopped top pair leaving Haisam drawing thin.  A blank turn sealed his fate and he finished 5th for 11 points.

With four left, Rich found himself the extreme short stack.  Steve moved all in from the small blind and Rich called off his short stack.  Rich showed A9 but Steve had a dominating AQ.  They both flopped top pair but there were no chopportunities and Rich left in 4th and a 17 point payday.

With a minimum payout of 28 points, Andy figured that he had virtually locked up his 2017 WSOP ticket and decided to just use his large stack to pound Spencer and Steve into submission.  With Spencer on the short stack, there was little that Steve could do.  Steve even had to fold AK in the big blind to one of Andy’s shoves as Spencer only had a few blinds left.

Eventually Spencer moved his final two big blinds into the pot and both Andy and Steve called.  The two checked down a board of 95T92.  For the third time at the final table, Spencer tripled up as he tabled TT for the full house.

Andy continued to use his stack as a battering ram.  Both Spencer and Steve were blinded down and Spencer eventually took a stand from the small blind against Andy.  He moved all in with his final two big blinds and Andy called.  Spencer had K4 of diamonds and Andy had Q2 of spades.  There would be no more run good for Spencer  as a flop of JA3 of spades gave Andy the flush and no outs for Spencer.  Spencer managed to survive while the larger stacks around him crumbled and finished in 3rd for 28 points.

Andy had already stated that he would be shoving all in on every hand in heads up play.  True to his word, he shoved all in on the first hand and Steve called with around 8 big blinds left.  Andy turned over T4 and Steve had J8 of clubs.  Andy essentially shut the door on a 44Q flop.  The turn brought Steve a useless gutter with the T that gave Andy the full house and the victory.  Steve’s 2nd place finish provided him 40 points and Andy’s second victory of the season gave him 53 points.  With his victory, Andy is guaranteed a seat at the WSOP and solidified his place as one of Piranha’s most consistent performers.