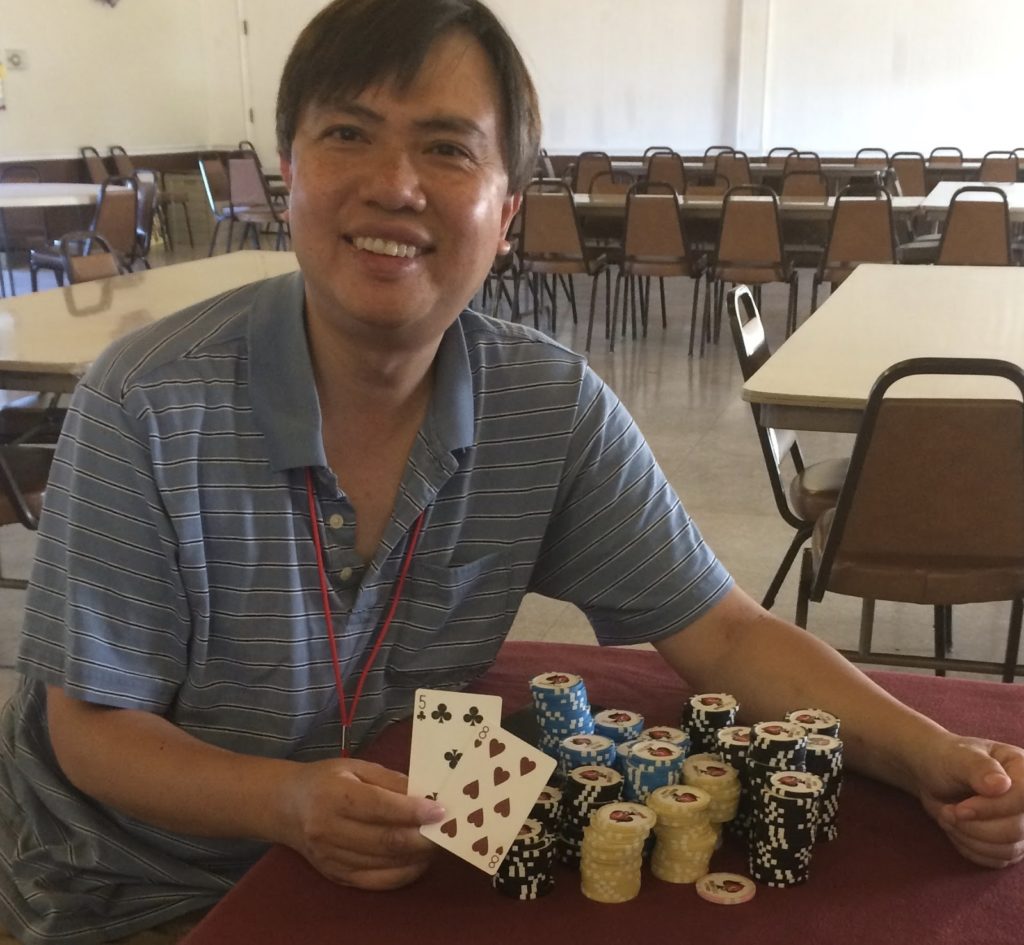 Piranha Welcomes Returning Veterans – One of Them Takes it Down

Season 12 opened with 24 players coming out for a very warm day of poker at Piranha’s newest venue, Tara Hills in San Pablo by the Bay.  Not sure if it was the heat or the new venue, but the numbers were small for a first tournament.  Most of the players were veterans who have been playing with Piranha for several years, some of whom haven’t played much or at all, in the past couple of seasons.  It was good to see Mykel Rodriguez (joined Season 2), Judy Lepire (joined Season 3), Ray Chiu, (Season 5) and Ash Showeb (Season 5).  Congrats to a veteran from Season 2, DOMINIC CHAN, for taking 1st!

Unfortunately, Ray Chiu was our first player out, early in the 2nd round.  We didn’t lose another player for over an hour and then lost 4 in quick succession.  We broke to two tables just as we were approaching our 3rd hour of play.

There were several crucial hands with “The Christine” (A Q).  In Level 4 a frustrating hand for Eric Grady’s all in against Adrian Aguilar went like this:  Eric shoves with Q 5 off and is called by Adrian with A Q off.  Flop of 5 9 4 puts Eric in front, and he further strengthens his lead with a Q on the turn, only to lose when that darn “Ace on the River” arrives.

In Level 7, Judy Lepire shoves with the controversial A Q and Alex Lum tanks, finally calling with pocket 6 6.  Judy hit an A on the turn and a Q on the river, but too little, too late for Alex’s flopped set of 6’s. Six places paid and in Level 10 Jeannette Sims became our bubble girl again involving A Q held by Dominic.  Jeannette had K 10 clubs and has 2 pair and a flush draw after the turn, only to have Dom hit a J on the River to win with his Broadway straight.

The two Tony’s, Robinson and Gaglione were both taken down by Alex Lum.  Tony Robinson shoved with A 3 and was called by Alex with 7 7.  No help for Tony and he was out in 6th, earning 3 points.  That was followed by Tony Gags getting it all in with A 9 against Alex’s A K and again no help for Tony.  He earned 7 points going out in 5th.

Alex was then crippled after Dom raised his pocket JJ and Alex shoved with A 10.  Dom hit a set when the flop came 3 J Q, giving Alex a Broadway draw, but no help on the turn or river.

A few hands later Dom finished the job when Alex was all-in with 8 2 suited against Dom’s pocket 4 4.  Again, no help for Alex and he was out in 4th earning 10 points.

A hand between two equally large stacks Andy and Dom became the decider as to who was going to take this tournament.   After Sheng folds his button, Andy raises from the small blind and is called by Dom in the big blind.  The flop is 4x 6h 7h.  Andy bets and Dom calls. The turn is  5h. Andy bets again and Dom calls.  The river is 8x completing a straight on the board.  Andy shoves all in and with a possible flush on the board, Dom tanks for a couple of minutes.   He ultimately calls showing Kx 9h hitting the higher straight with Andy showing K J (no flush).

Andy finished in 3rd with 22 points.

Heads up started with Dom having a 3:1 chip lead over Sheng Xie.  The final hand went like this:  Dom 8 5 off and Sheng 6  7 off.  Flop comes 4 6 3 giving Sheng the lead and he shoves.  Dom calls with his open-ended straight draw. The turn is a meaningless 4, but Dom takes it down on the river when an 8 hits, giving him top pair. Sheng gets 2nd for 33 points.

Congratulations to our winner, Dominic Chan.  His first place finish earns him 45 points!