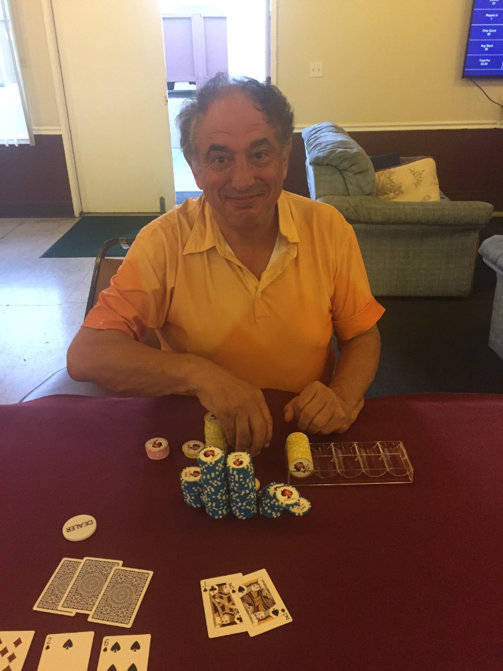 Early in the 2nd level the following hand was played. With the blinds at 50-100 Jan opened pocket Queens for 250. Dom flat called with pocket sixes. Then, Mario Stefanidis, holding KK, three bet to 1,200. Jan called with her QQ, Dom, however, folded his 66 and a good thing he did as the flop contained a K and a 6.

Mario check/called the flop after Jan bet her queens. Both checked the turn. At this point Mario is sitting on quad kings so he bets 2,000 for value on the river and Jan calls with her 2 pair.

Fast forward to the final table:

The bubble: Dennis Koeller is holding AK spades, Jaime Rascon QQ. They get it all in after Jaime spikes a set on the flop and Dennis plays a nut flush spade draw. The spade hits the river and Jaime is the bubble boy.

6th place: Patrick Galamay opens holding KK. Tony Robinson three bets to 4,500 with his AK. Then, Ryan pushes a small stack of 5,700 all-in with his KJ. Patrick also goes all-in and Tony who has everyone covered comes along as well. The kings hold up, Patrick picks up some much needed chips, and Ryan heads home.

5th place: Patrick is UTG with AJ and he opens for 4,000. Tony comes over the top for 17,100 holding 99. Patrick makes a thoughtful call. An ace on the flop eliminates Tony and brings us down to 4 players.

4th place: Cathy Seferi’s stack has shrunk to the point where it seems quite reasonable that she pushed all-in without looking at her cards. Syd did look at his cards, found an ace, and called. The ace was enough to take the pot.

Heads up between Patrick and Syd: They battled for about 30 hands until this final hand. A decent pot had developed and Patrick pushed with an open ended draw of 9 through queen. Syd is sitting on top pair with a king kicker. Patrick misses the straight and finishes in 2nd place.