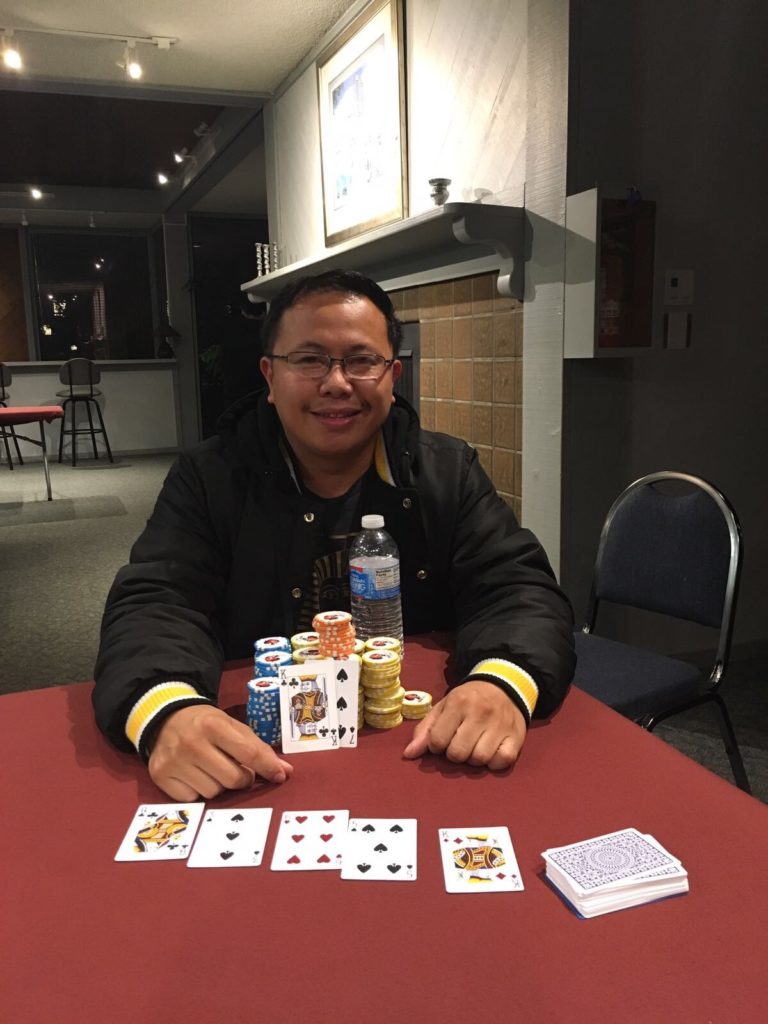 Event 5 went smooth and well. Only 2 TD decisions that were already taken care of prior before I got to the table but was summoned to confirm and formally continue. I appreciate players being responsible of controlling the table when it’s their turn to play dealer and as asked at the beginning of the tourney to step up as table captain.

Biggest turn out yet with 50 players coming out. With lots of referral members  returning receiving their bonus chip, 5/6th of the field registering early, almost 3/4 investing in the travel chip and several players busting early, there seemed to be a lot of deep stack power poker in the early and middle stages of the tourney.
12 players received points for their efforts.
After Jeanette Sims busted  on the bubble on level ten with 25 BB on a one outer (she asked me not to report the hand or player to avoid the  trauma), the Bad Beat Party started.
First victim was first time player Eric Manalo. Referred by Geoffrey Batuyong, Eric 3 bet shoves Cowboys to run into current Chip leader Haisam with the Lon McEachern Memorial Hand. Haisam, who had close to a fifth of all the chips in play coming in to the money, run good wasn’t over flopping a Jack right in the door on the flop. Eric received 3 points for his effort. Not to shabby for his first Piranha tourney, although I won my first won but who remembers.
11th place for 4 points was given to Sheng Xie. His bad timing shove with 30+ BB after an under a gun plus 2 raise from either Amo, Bill, or Gerry (He says titling, “it was one of them, pick one” was Jacks running into Queens. He really insisted me to report that after he’s slow pace all in shove, the villian snapped with 90% of his stack without even considering if they were behind or flipping.
Next Bad Beat was given to Elaine On. With 10 BB in Level 11 she tries to steal the Blinds and Antes with KJ off in late position but Run Good so Far Chip leader Haisam called in the big blind with K8 off and spiked the 8, probably on the river. Elaine was rewarded 5 pts for her 10th place finish.
Final Table: Bad Beats continue.
Level 13 with the Blinds climbing forced Gerry Shebar shoving a short stack with A6 off dominating big stack villains A5 off. With no improvement on the flop and turn, a chop was destined to happen on the river, especially after someone said they mucked a 6, but of course the 2 outer rivered. His deep run earned him 6 points.
A level later Pepito met his fate by 3 bet shoving AQ off only to run into the chip leaders Big Slick. Not only he was dominated, but the flop came Broadway for Run Good So Far Chip Leader Haisam. Not able to hit his gutter for a chop, Pepito received 8 points for his 8 place finish.
10 points was given to 7th place finisher Amo Tarnoff. His pre-flop shove of A6 was flipping with Chip leader Haisam’s pair of treys.  Run Good holds.
Another dominated hand gets 3 outed.
Bill Sims shoves KT suited to villians K6. And of course a 6 appears right in the window. Bill earns 12 points for his 6th place finish.
On level 14, a previous member (who claims hasn’t played in Piranha in 4 years) plays his 1st tourney back and is greeted with 16 points for a 5th place finish. Spencer Robinson (son of legend Tony Robinson ) pushed his remaining chips with 57 suited only to crash into a dominated J7 off. Welcome back!
Level 15 with 4 players left. Chip leader has around a third of chips in play while 2 players had smilier stacks and Joey Kong with the effective stack.
Joey Kong was first to tackle the big stack. She doubles up after moving all in after flopping in open-ended straight draw with her JT suited. The river card  binks one of her 8 outs and starts the crumbling of the Chip leaders mountain. This crucial hand puts her in a dominating position and is only a few steals away of the chip lead.
Although Hasiam took a hit there, he recuperates a little bit after shoving Ducks to grab the blinds and Antes, but was called by the Big Blind. Rodney Resella defended his BB with KJ off. Hoping the chip leader was shoving light, Rodeny did not get reward. He did flop a gutter, Run Good turned a set, and no improvement on the river.
The crippling hand left Rodney with 2 BB.
The very next had Rodney shoves; Haisam on the small Blind and Big blind call. The board runs out KQT6T.
Rod Flora, defending his big blind, turns over AT for trips. Both Haisam and Rodney muck their hands face down. Rumor has it he got rivered, so his all in range with that stack and that position could be any face card, pair, or Ace. Since he got rivered- hands that beat him before trips are Aces,Jacks, AK, AQ, KQ, A6, K6, Q6. What a river.
Rodney earned 26 points for his 4th place finish.
Change in the guards.
After a few hands 3 handed, level 16 closes the story.
Haisam now without a dominating stack faces Joey again and at this point Joey has him covered.
Haisam shoves with pocket treys. Joey decides to defend her Big Blind with K7 off.
A huge coin flip. Now it’s Joeys turn to run well. Pocket treys did not hold. Joey turns an inside straight draw and gets there on the river. Runner Runner Broadway.
Haisam receives 36 points for his deep run, placing 3rd .
Heads up:
Joey with roughly a 4-1 chip lead over Rod.
After a few steals here and there; their first big hand is when the board was showing 3552, pre action was normal with a raise on Joey’s button and a defend. Flop was check around. On the turn, Rod bet half the pot and Joey puts him all in, Rod snaps showing K5. Joey holding A2 and the last card fills up Rod giving him a boat with the King splashing on the river.
Chips stacks are closer now, maybe 65% Joey to 35% Rod
And then this happened.
Normal Agression heads up play. Button Raises and then there’s a Defend. Flop comes 345 Rainbow. Both players check the flop. Then fire works after a Jack comes on the turn. Joey leads, Rod 2 beats, Joey 3 bets, and Rod 4 bet shoves.  Rod felts pocket treys for a flop set and Joey reveals 76 off for a flop straight. The Die hards who stayed and helped clean up, Thank you Alan Sien and Rich Modjeski (both victims of bad beats with Kings) as well as the die hard players playing for we won’t say, all gathered and awed. After the drum roll, the river was another Jack! Filling up Rod and denying Joey to win her First Tourney of the year.
Now the chip lead switched in favor of Rod.
And the final hand was Joey’s all in shove with AJ suited on a K56 Rainbow flop. After Rod check the flop, he snapped with his King 7 off after Joey shoved. With no improvement Joey earned 55 points for second. And Rod received a whopping 70 points for First. Congrats to all players. Thank you Nora for you help.
Ferdy J