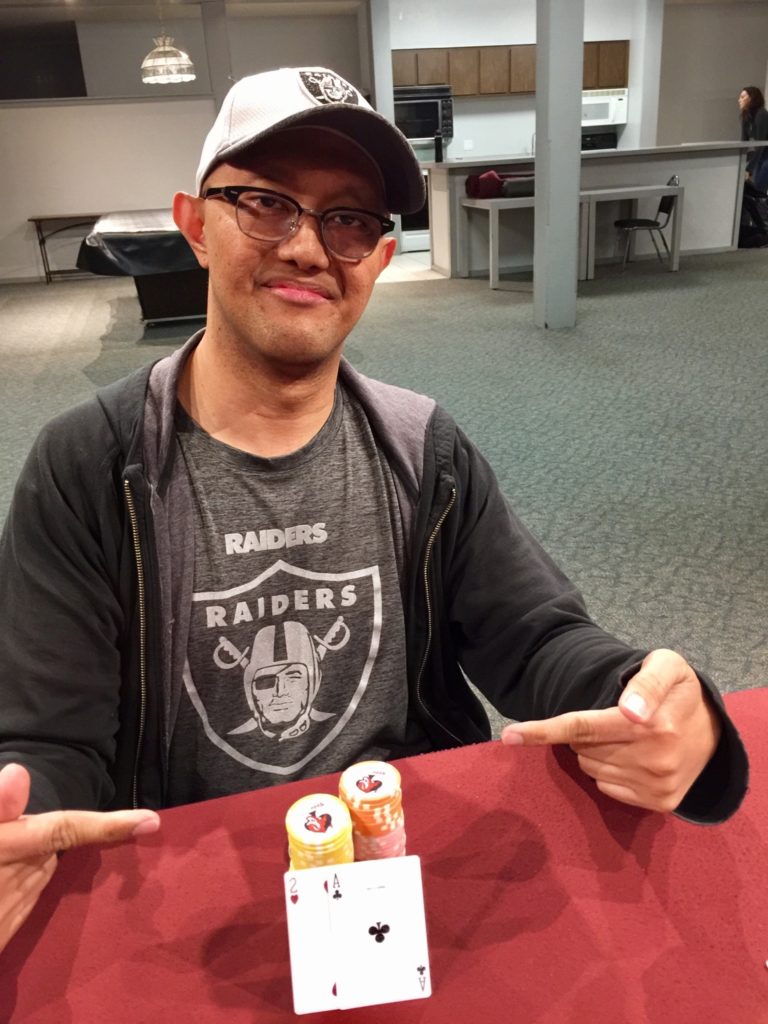 The final table’s first two eliminations happened on level 13 on one hand.
Rodney Resella UTG with KQ off tried to pull off an aggressive steal from early position, shoving with a decent size stack pre-flop, trying to pick up dead money but is stunned by running into Eugena Talvola’s Aces who had him covered. Jeannette Sims, who was the effective stack at the table decides to also join the party with such great pot odds with any two, Jack-5, since her Big Blinds were already in. The “eyes of Texas” held and since Rodney had more chips than Jeanette. Jeanette took 9th and Rodney 8th. Both earning 3 and 5 points, respectively.
The next knock-out was on level 14. Jeffery Dong attempts a steal in the Big Blind after the button folds and the Small limps, shoving with 97 suited only to find that the limper in the small blind had the best starting hand in Hold ’em. JD earn 6 points for his efforts.
Next player eliminated was Alex lum who literally had 1 blind left in his Big Blind. His 5 Deuce off did not improve against the small blinds Ten 9 off. Alex took 6th place, earing him 10 points for his survival.
On the 15th level of play, Blinds are 2k and 4 k with a 500 ante.
Vineet Kumar gets involved in a massive pot, 3 betting shove with AK suited against Eugena pocket Jacks. Vineet spikes an Ace on the flop, but on the turn, Big Slick gets smashed when the Lon McEachern Memorial Hand improves to a set!!! Vineet takes 5th place earning 14 points. Rumar had it that someone mucked a Jack, making the bad beat even sting a little more.
On level 16, Blinds are 4k and 8k with an $1000 ante
Jeanne Massuda earns 4th place after calling in the Big Blind with Ace- four off, not improving against the small blinds snowmen. Jeanne earns 21 points for her deep run.
On level 17 now playing with pink and orange chips (not going to mention amount, need to play better if you want to see these amount) blinds are 5k and 10k with a $1000
After a few beats. Chip leads swung from 1st to 3rd and back. Eventually, Eugena found herself all in with KT  off and covered by Gerry’s Ace Jack. Dramatically she flops a Ten but then gets Barry Greensteined, with an Ace on the River. After being chip lead for most of the final table, Egena earned 31 points for her great run.
Heads up ended right before level 17 was completed.
Gerry behind a 2-1 chip lead to Patrick Galamay was All in with the San Francisco Bus boy against Patricks little slick. His Q3 did improve. Acey-Duecey or Hunting Season holds.  And Patrick “pinoy maverick” Galamay wins event 8.
Gerry earned 48 points and Patrick 62 points for ousting 40 players.
It was a pretty smooth event. No TD decisions and no angry complainging home owners to bother us 🙂
Ferdy J again provided a flawless, fun, and friendly tourney; the triple Fs