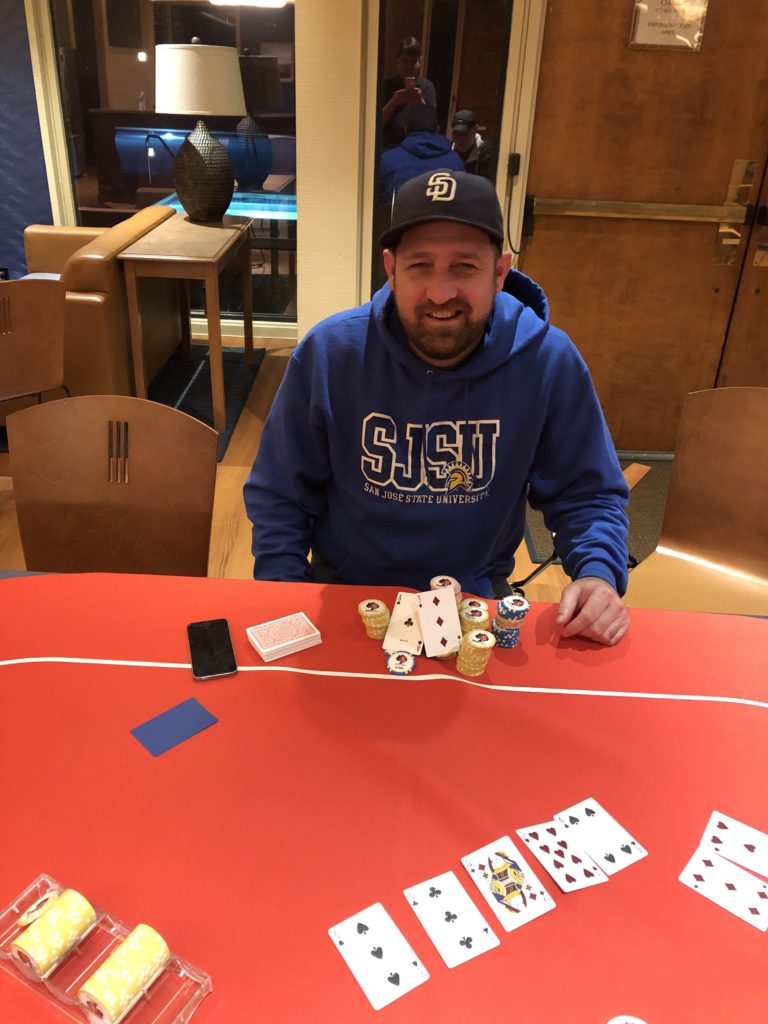 Twenty three unsuperstitious players showed up for the 13th tournament of Piranha’s 13th season, including Andy Press, a veteran Piranha alumnus who has returned to the Bay Area from exile in Southern California. Notable hands from the early going included Joe’s AA all in against Dennis’ KK and Gordo’s QQ, with Mark wisely folding his … Read more Welcome Back Andy

21 players showed up in San Pablo on Saturday, January 26th for the 11th tournament of the season. Early notable hands included Bill Sims hitting a Straight Flush against Patrick Galamay’s two pair in the very first round. Leading up to the final table, Tony G. was clearly securing his lead, double busting Ricky and … Read more Event 11 Recap 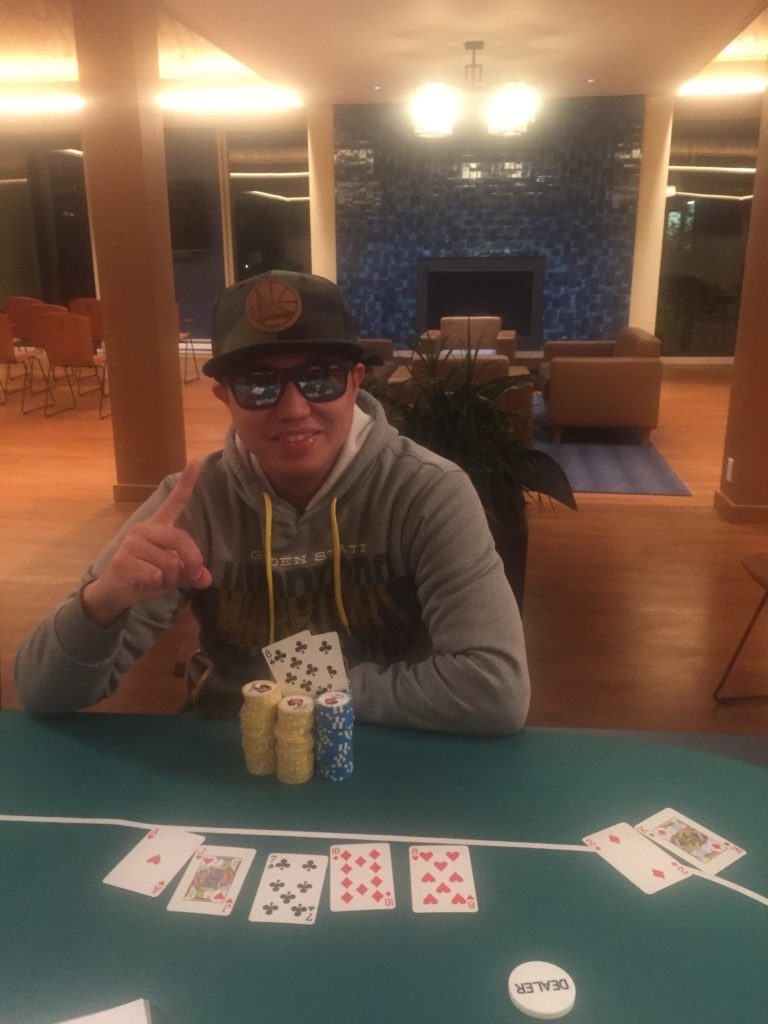 It was Tony vs Ricky, once again, heads up for Piranha first place points. The last time they were heads up was on September 8, 2018 when Mr. Robinson won the day and 43 points to Ricky Flora’s second place 31 points. Would this battle end with the same results? It was tournament 10 on … Read more Ricky and the Rematch 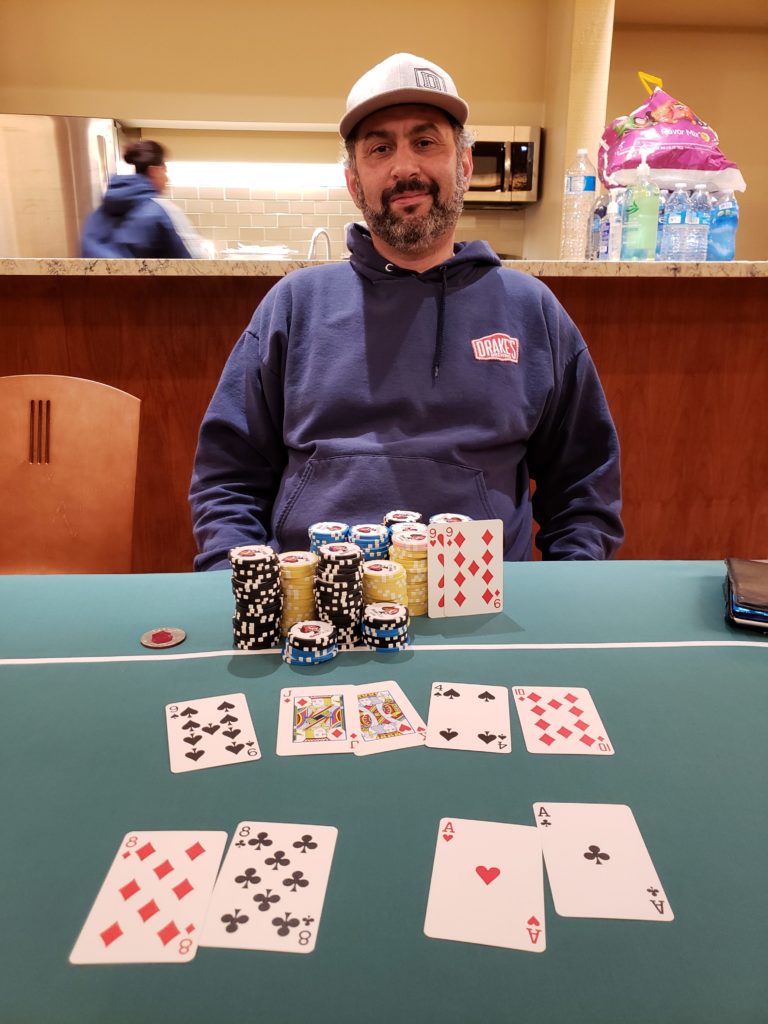 It was a dark and stormy day when 21 hearty poker degenerates braved the elements to battle it out in Foster City this past weekend.  Cards were shuffled and dealt, chips were wagered. Big hands held up, unless the were blown up by suited connectors. Bad bluffs and good calls came and went.  Aces were … Read more Cracking Aces in Foster City 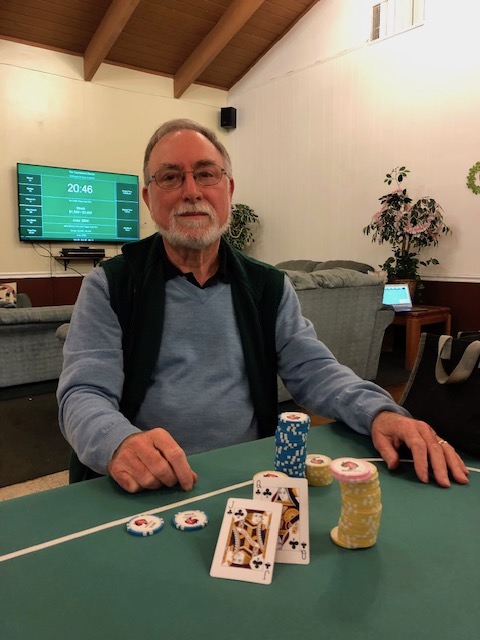 A small, but spirited twelve players showed up to do battle on a chilly Saturday in San Pablo. First out was our gracious host, Jan K, who pushed with a set of Jacks and ran into Dominic’s flush. The final table had Dominic and Gerry clearly in the lead, with big stack dominance. Less than two … Read more Old Guys Rule

17 brave souls braved the worst air quality on the planet to do battle in Fremont for Event 7, 4 of whom would be awarded points for their efforts. Rich Modjeski was the bubble boy when his pocket kings were outdrawn by ace five. FINAL FOUR With the blinds sitting at 800/1,600/200, the final four … Read more Hot Rod Strikes Again 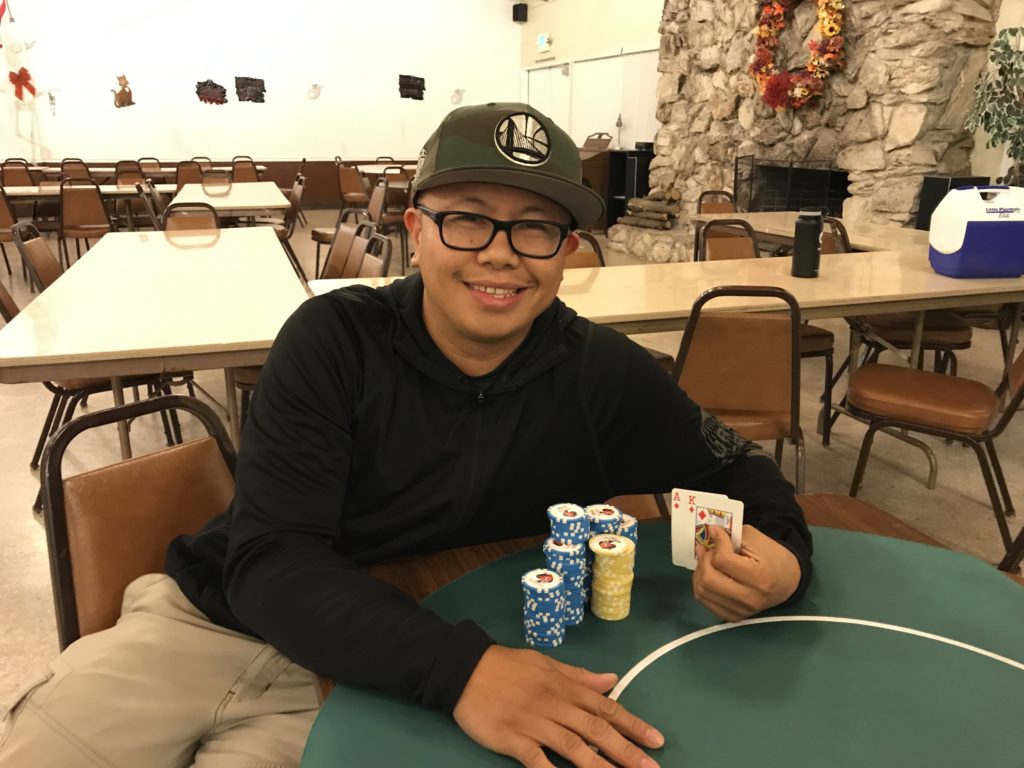 [Points standings are not up yet. Working on it! – Ryan] Twenty people showed up last Saturday to do battle in what turned out to be a roller coaster ride of a tournament. I’ll post some of the more interesting hands below: First bust-out, in round 1, preflop Christine raised out of position, and Lisa … Read more Rod Rebounds 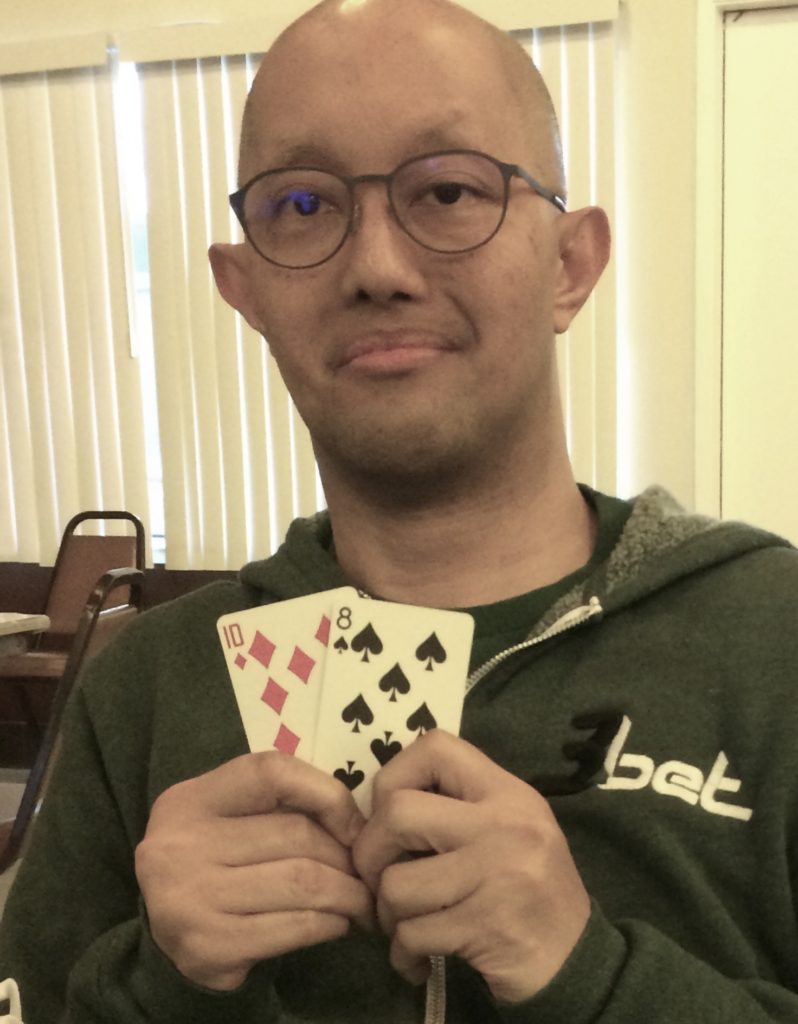 Tourney 4 in San Pablo almost didn’t happen. We only had 7 people signed up early Friday, but with a lot of recruiting and yours truly playing as well as being TD, we ended up with 11.  I thought it’s going to be an early day, but surprisingly we didn’t finish until almost 7 p.m.

First hand of note at a table of 5, was a 4-way limped pot on the last hand of the second level with blinds at 50/100.  Patrick, on the button with

, Bharad in small blind with

, and Lisa in big blind with J9. Ricky also limped in but folded after action on the flop of

.Lisa led out for 250 with calls from Patrick and Bharad.  Turn is

and Patrick is first to lead out for 750, Bharad calls and Lisa raises to 1500, with two callers. River is

completing a straight on the board. Bharad leads out for 1000, Lisa folds and Patrick calls. Both Bharad and Patrick flopped straights with Lisa flopping two pair. Bharad takes it down with the higher straight. 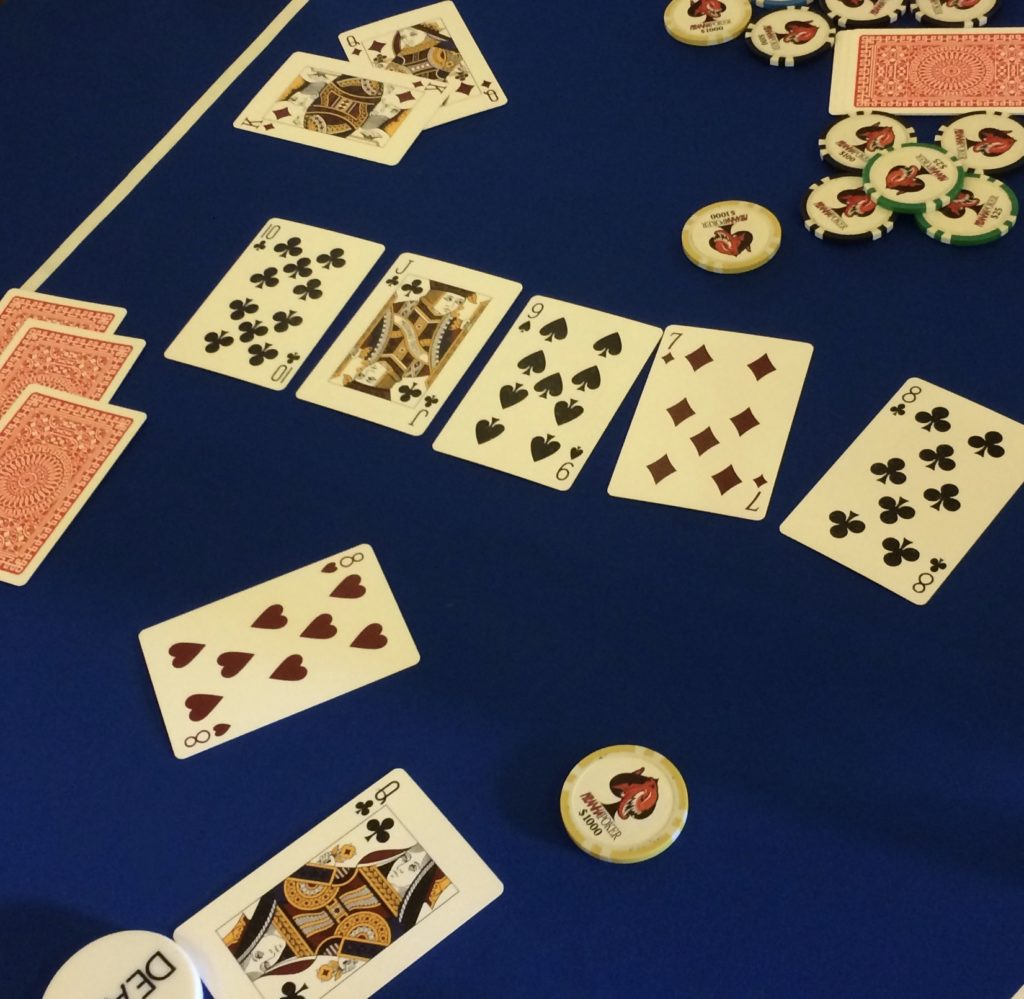 Ryan was the first bust out in Level 3 followed soon after by Jan when her pocket Aces were cracked against Patrick’s QJ who hit a straight on the river.  We reached our final table just before the lunch break.

In Level 6 we had a 3-way all-in.  Mark, who was short-stacked shoved first with his pocket 10’s, Ken, who was shorter stacked than Mark also shoved with

, followed by Gordo who went all in with pocket QQ.  The flop is Q 2 2 and that’s all she wrote after Gordo flopped a boat. Ken out in 9th and Mark out in 8th. 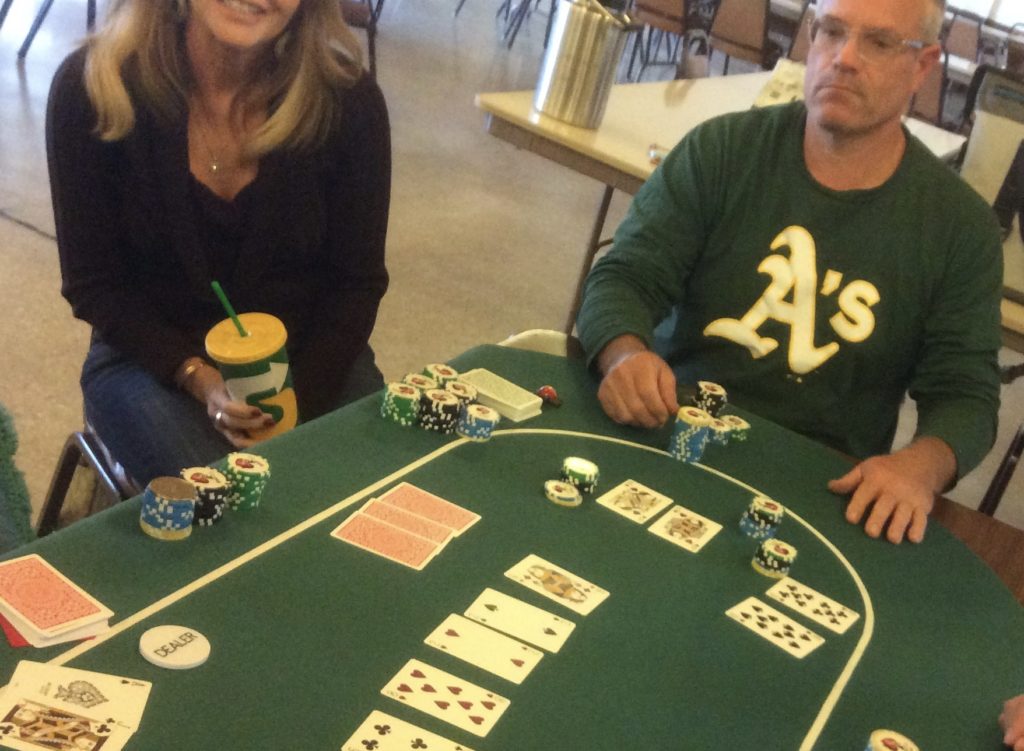 . Patrick overtakes Bharad on a Flop of

and finishes Bharad off with a 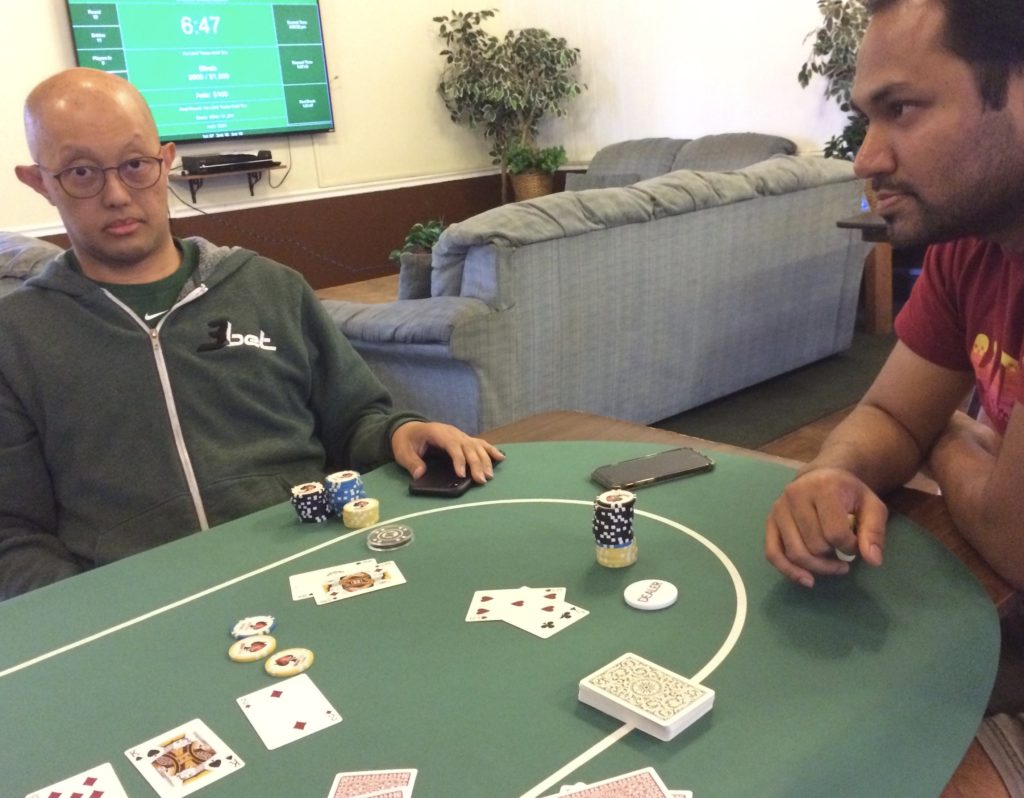 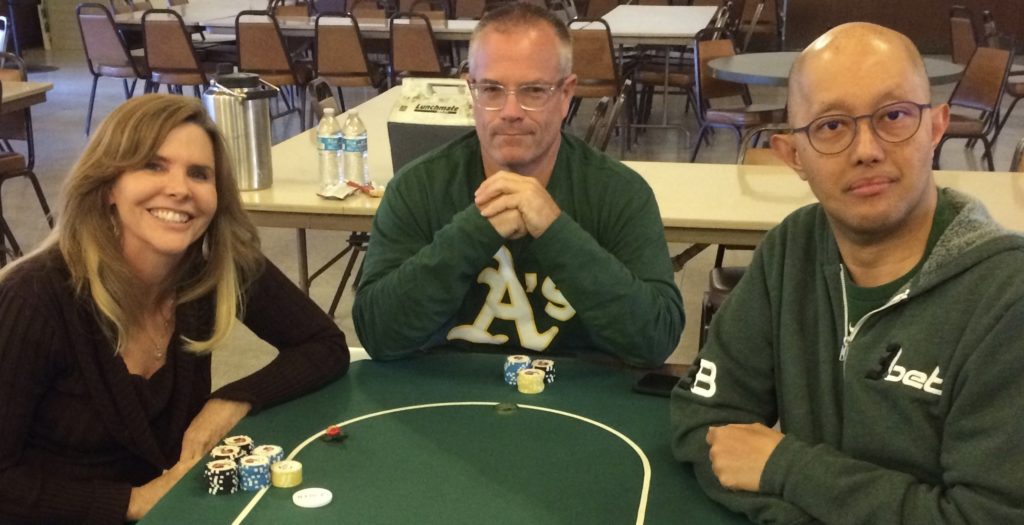 Still in Level 11, Patrick gets pocket Q Q yet again and shoves preflop being called by short-stacked Gordo with his 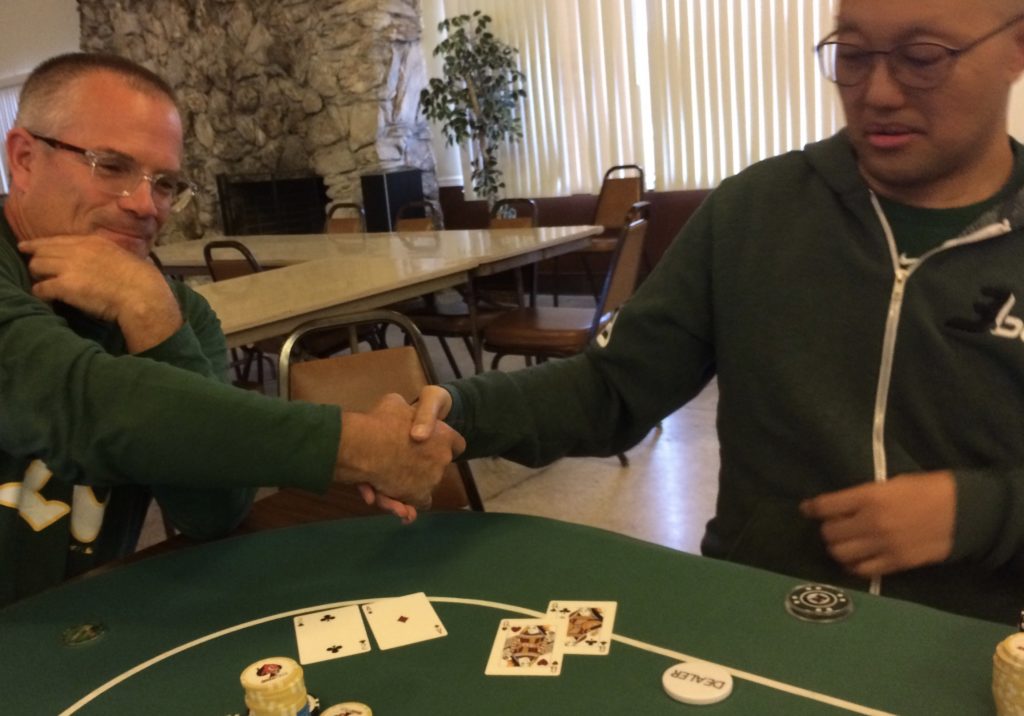 Patrick goes into heads-up with an overwhelming chip advantage over Lisa and heads-up play only lasts a few minutes.  Bet, call preflop and on flop of

. Again, bet call on turn of

, shoves on river with her pair of 6’s.  Patrick instacalls and flips over

for the straight flush and the tournament win. Congrats to Lisa who earned 18 points and Patrick who earned 27 points for his 1st place finish. 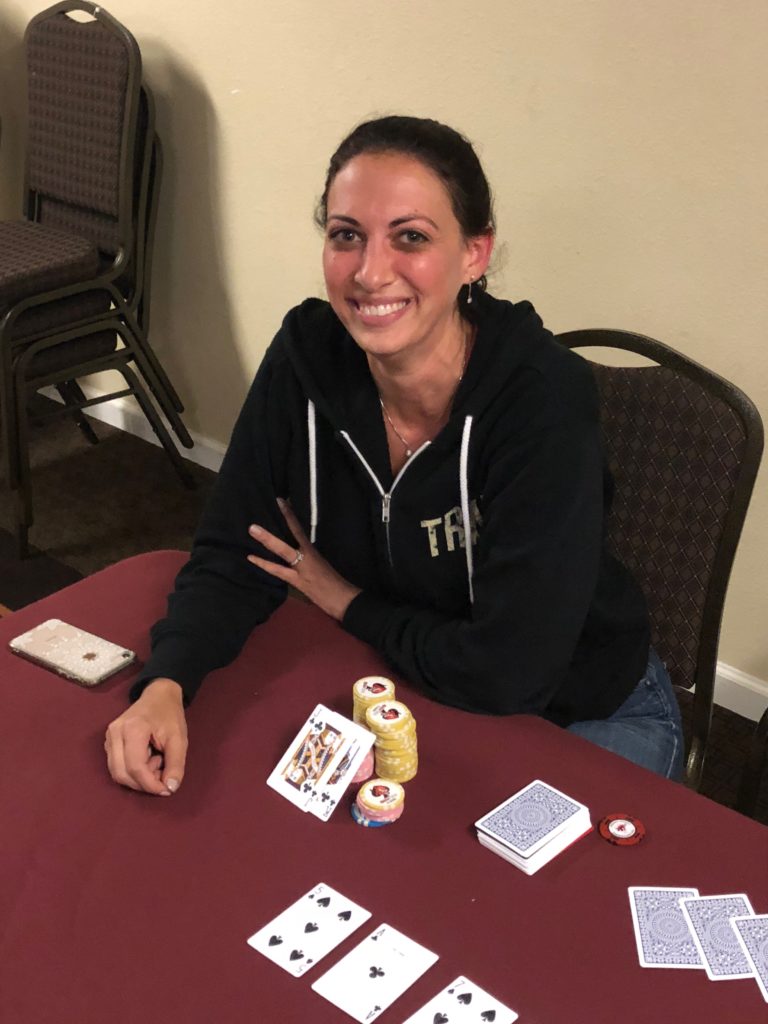 Congratulations to Nora Massuda for taking down the 3rd tournament of Season 13.  Nora’s excellent play and a little bit of luck which included a ROYAL FLUSH sent the other 22 players packing. Early in the Tournament- On a board of , Steve Stockmal in the BB checks and Ryan Drake Cbets from the button … Read more MASSuda Effect!